Gone are the likes of Old Kent Road, Marylebone Station, and Mayfair. The Lakes Monopoly has replaced all of the classic squares with Lake District places. As you work your way around the board you have the opportunity to purchase some of the Lake District’s most loved spots, as well as popular Lake District businesses.

As usual, the board starts at the cheaper areas, though we think Castlerigg Stone Circle, the replacement for Old Kent Road, is well and truly priceless. This beautiful stone circle sits above Keswick in an amphitheatre of fells, evoking a mystical atmosphere. The second brown square is occupied by Aira Force, another priceless beauty. This breath-taking waterfall can be found close to Ullswater.

As you work your way around the board, you will visit a number of well-known places, including those linked with famous Lake District figures. Beatrix Potter, who devoted much of her life to preserving the Cumbrian landscape, is remembered via her former residence, Hill Top, which occupies one of the light blue squares. Today, it’s a National Trust owned property that has been preserved just as Potter left it when she passed away. Romantic poet, William Wordsworth, is also remembered on the light blue squares, with his former home, Rydal Mount, also taking a spot. Wordsworth inspired a generation to see the Lake District as a place of outstanding natural beauty, rather than a rugged wild space that was to be avoided.

Of course, the Lake District is best known for its lakes and mountains, and with so many to choose from it’s not surprising that most did not make the final cut. Those that did include Ullswater and Helvellyn in the dark green squares, whilst the most expensive squares have been given to Windermere and Scafell Pike, the largest lake and the highest mountain in England.

However, it’s not all about the lakes and mountains. Cumbria has a fascinating history and dotted around the county you will find a wonderful array of historical buildings, some of which are featured on the game’s board. Both Wray Castle and Sizergh Castle can be found on the yellow squares, whilst the intriguing Stott Park Bobbin Mill occupies one of the orange squares. The mill lies on the shore of Windermere and is a reminder of Cumbria’s role during the industrial revolution, for it was here that millions of bobbins were produced to supply the Lancashire weaving industries. The mill has been restored and is still able to produce bobbins today.

Many businesses also make an appearance on the board, reflecting Cumbria’s rich food and drink heritage. You can buy the Lakes Distillery, the Hawkshead Relish company, and George Romney’s Kendal Mint Cake on the red squares. Of course, Cumbria doesn’t have the same rail network that can be found in London, so the traditional four railway stations have been replaced by the likes of the Windermere Ferry and Whitehaven Harbour, amongst others. 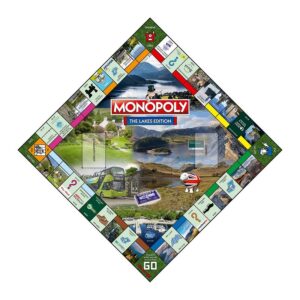 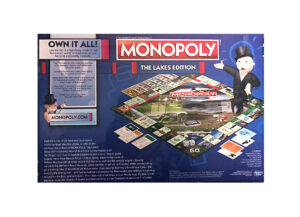