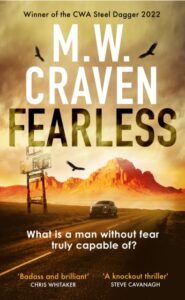 Join Bookends for an evening with bestselling Carlisle crime writer M W Craven as he launches a brand new series.

What is a man without fear truly capable of?

Five million reasons why Ben Koenig had to disappear. Only one to bring him back…

Ben Koenig is a ghost. He doesn’t exist any more. Six years ago it was Koenig who headed up the US Marshal’s elite Special Ops group. They were the elite unit who hunted the bad guys – the really bad guys. They did this so no one else had to. Until the day Koenig disappeared. He told no one why and he left no forwarding address. For six years he became a grey man. Invisible. He drifted from town to town, state to state. He was untraceable. It was as if he had never been. But now Koenig’s face is on every television screen in the country. Someone from his past is trying to find him and they don’t care how they do it.

In the burning heat of the Chihuahuan Desert lies a town called Gauntlet, and there are people in there who have a secret they’ll do anything to protect. They’ve killed before and they will kill again. Only this time they’ve made a mistake. They’ve dismissed Koenig as just another drifter – but they’re wrong. Because Koenig has a condition, a unique disorder that makes it impossible for him to experience fear. And now they’re about to find out what a truly fearless man is capable of. Because Koenig’s coming for them. And hell’s coming with him…