A new night for Cakes and Ale…
…Debates and Ale!
This night will be for debating, discussing and the general exchange of ideas. 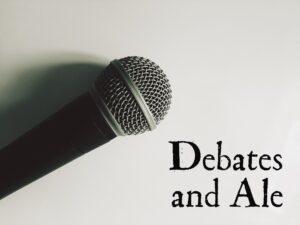 Each Debates and Ale evening will be split into two halves, with one speaker in each half having 15 minutes (or less) to put forward a motion, uninterrupted. Then the floor will be opened up for anyone to question and debate the speaker for 45 minutes.
After a short break, the second half will begin with a second speaker and a different motion.
Next date to be announced – January 2022